The Dominican Republic’s nationality rules are a tangle of check-boxes and criteria, but for one family the impact of new legislation could not be more stark. By a fluke of bureaucracy, two out of three children might be awarded citizenship and all its benefits, but the third could remain lost in the limbo of statelessness.

I met the Nuel family in March 2014. As three young children gurgled and crawled around her feet, their mother Liliana Nuel told me about her dreams for herself and her family. She dreams of studying Law at university, and has similarly high hopes for her three babies.

But it would take some serious legal expertise to untangle the complex issues around the official citizenship of this small family. The Nuels are of Haitian origin, which means their rights in the Dominican Republic are precarious. New regulations brought in by the authorities have further complicated their position in the country and the past months have been a roller-coaster with many twists and turns. 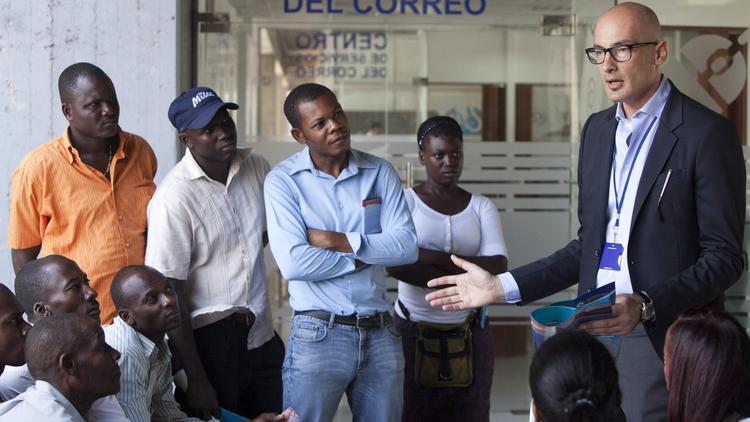 An official with the International Organization for Migration talks to people of Haitian origin at the headquarters of the Ministry of Interior in Santo Domingo, Dominican Republic, on June 2. (Orlando Barra / European Pressphoto Agency)

Maribel Campusano Fajardo smiles shyly at the ring on her left hand. “The ring is just a promise, because we can’t get married without the identity card,” the 25-year-old said.

Fajardo’s fiance, Rafael Toussaint, 26, is one of thousands of people born in the Dominican Republic to Haitian parents rendered stateless by legal policies until last month.

In May, the Dominican Congress approved a law that will regularize the status of many people like Toussaint. It ends an eight-month legal standoff that followed a Constitutional Court ruling that canceled the citizenship of those born after 1929 to immigrants without proper documentation.

Santo Domingo, March 10th 2014. The Reconocido Movement rejected the most recent Sentence 28-14 of the Constitutional Tribunal, because it revokes the sentence issued by the Civil Chamber of San Pedro de Macorís which ordered the Central Electoral Assembly the return of identity documents and birth certificates to 28 Dominican citizens.

“The new Sentence 28-14 of the Constitutional Tribunal confirms the precedent established by Sentence 168-13, through it’s insistence on premising the nationality of solicitors on the migratory conditions of their parents” affirmed Noemí Méndez, lawyer of the group. Méndez commented that the new sentence repeats the violation of Article 3 of the American Convention regarding the recognition of legal status and Article 18, which obligates the States to protect the right of name and nationality of the people.

On the afternoon of Oct. 4, Maria Pierre stood up in front of a huge crowd of demonstrators at the Dominican Constitutional Court in Santo Domingo and confessed that she was in her native land illegally. “My only crime is that I was born here,” she began, and then her tears started flowing. The supportive crowd cheered her on with a loud chant: “We are Dominican, too! We belong here! We are not going anywhere!”

Ms. Pierre, 19, who was born to Haitian parents who were in the Dominican Republic illegally, is one of more than 200,000 people affected by a historic ruling by the Dominican Constitutional Court denying citizenship rights to those born to undocumented people. The ruling is ostensibly aimed at controlling undocumented immigration from Haiti, which has increased by about 20 percent since the 2010 earthquake. But because it is retroactive to 1929, this “immigration reform” means that people like Ms. Pierre, who know no other country than the Dominican Republic, will be placed in civic limbo, unable to attend school, to work or even to cash a check.

Democracy at risk for all dominicans

The international community has justifiably condemned a decision by the supreme court of the Dominican Republic revoking the citizenship of as many as 350,000 Dominicans of Haitian descent. Unfortunately, that decision in September was just the latest in a pattern of cynical, partisan actions that threaten the rule of law and economic growth in that nation.

Dominicans of goodwill must act to restore the probity and independence of their institutions to secure a better future for all of its citizens.

Bonó Center refuses to send four copies of the brief, “Vidas Suspendidas”, Suspended Lives to Rosario Márquez.  The brief presents the human drama that is generated by the mass stripping of nationality by the Central Electoral Board and endorsed by the Constitutional Court.

Mario Serrano Letter to the Central Electoral Board

Through this means, I respond to the correspondence that you sent to me on the 28th of October 2013 in which you informed me of the creation of the Oversight Commission under the request of the National Migration Counsel in response to the Constitutional Court’s ruling (No. 168-13), and you invited me to be a part of the commission.

I am at the Aereopuerto Internacional Las Américas, José Francisco Peña Gómez in Santo Domingo, Dominican Republic while I wait for a flight from Santo Domingo to San Juan.  A Dominican woman sits next to me and asks me to help her fill out the all English customs (…) I tell her that the feeling that I got from watching the local news is that there is a consensus and that mostly all Dominicans agree with it.  “Mentiras”,  she argues,  “lies” all that appear on the news here are lies, “they are all lying and they are corrupt” and “many people simply don’t want to address they discontent openly because they fear they will be deported.” Where they will go? They are Dominicans.”

Some Dominicans suddenly outsiders in their own country

By Mariano Castillo, CNN — Some Dominicans who have never traveled outside of their country of birth could suddenly find themselves outsiders.

The citizenship of tens of thousands of Dominicans of Haitian descent may be stripped, the result of a court ruling that affects those who were born to parents who were in the country illegally.

Jesuits respond to statelessness problem in the Dominican Republic

Jesuits respond to statelessness problem in the Dominican Republic from Jesuit Refugee Service | USA on Vimeo.

LOS JOVILLOS, DOMINICAN REPUBLIC –  In a house with no running water surrounded by vast stretches of sugar cane, Abelinda Yisten Debel studies for a high school graduation exam she might not be allowed to take.

It’s not just her diploma that’s uncertain. The 19-year-old Yisten also faces the prospect of not being able to marry, get a formal job, or go to a public hospital if she gets sick.

She is one of an estimated 200,000 people who were born in the Dominican Republic and now may lose their citizenship, and the rights that go along with it, because of a recent Constitutional Court decision.

Nina Paulino was born in the Dominican Republic. She loves her native country. Ms. Paulino, 52, was among the several dozen protesters denouncing a recent Dominican high court ruling that annulled the citizenship of anyone born in the country to noncitizens after 1929. The decision applied to as many as 200,000 people, mostly people of Haitian descent.

“I see all these things: How I love my country, how I love my people, and how the government manages to mess up everything with decisions like this,” said Ms. Paulino, who holds dual Dominican and American citizenship and described herself as a community activist.

Dominicans of Haitian Descent Cast Into Legal Limbo by Court

SANTO DOMINGO, Dominican Republic — For generations, people of Haitian descent have been an inextricable part of life here, often looked at with suspicion and dismay, but largely relied on all the same to clean rooms, build things cheaply and provide the backbreaking labor needed on the country’s vast sugar plantations.

Now, intensifying a long and furious debate over their place in this society, the nation’s top court has declared that the children of undocumented Haitian migrants — even those born on Dominican soil decades ago — are no longer entitled to citizenship, throwing into doubt the status of tens of thousands of people here who have never known any other national identity.

Dominicans of Haitian descent fight back

When representatives of the Inter American Commission of Human Rights visit the Dominican Republic this week to look at the rampant discrimination suffered by Dominicans of foreign descent, Solange Pierre will not be able to help thinking about her mother.

Aged 48, Sonia, who passed away two years ago this week, would have been without a doubt, first in line to talk to them.

As a founding member and Executive Director of the Movement for Dominico-Haitian Women (Movimiento de Mujeres Dominico-Haitianas), Sonia dedicated her life to advocating for equal rights and respect for Haitian migrants and Dominicans of Haitian descent.